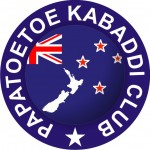 Kabaddi is one of the oldest sports of Indian origin and has a history of 4000 years. Kabaddi is traditionally an outdoor game played on grass. It does require any expensive equipment to play and it is known as the " Game of Masses". Kabaddi combines the characteristics of both rugby and wrestling to promote fitness and health.

Kabaddi has two teams pitched against eachother with seven members each. Each team has 5 reserve players. The duration of the match is fourty minutes for men and thirty minutes for women with a 5 minute break in between for the teams to change sides.